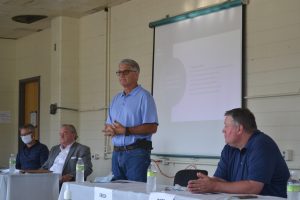 A meeting was held at the former AEP Power Plant on Thursday, Aug. 6 to share the plans of the company that purchased the plant and 2,500 acres. Frontier Group of Companies revealed their plans to clean up the site, demolish some of the buildings and look for new tenants for the new Conesville Industrial Park.

Craig Slater, vice president and general counsel of Frontier, said their company specializes in the demolition and dismantling of industrial sites around the United States, Canada and South America. “We re-use any of the buildings we think will work for a new business.” He shared that, in 2012, the company purchased a plant in Mingo Junction.

They knocked down what couldn’t be used, but found another company that wanted to keep the plant going. “Unfortunately, COVID caused some lay-offs there,” said Slater, but he hoped that when the economy bounced back, the employees would be called back. Frontier also purchased a former power plant in Weirton, West Virginia. Improvements were made and other parts were dismantled. When another business moved in, 110 jobs were created.

According to information shared at the meeting, Frontier has more than 150 years of collective experience in the acquisition, remediation and redevelopment of industrial properties. The company reviews liabilities that exist on the site and develops a re-use plan that addresses all limitations so that the property can once again bring jobs to the area and help restore lost tax base to the communities.

The project will include removal of coal combustion residuals (CCR) from the pond and placing them in the landfill on State Route 83; asbestos abatement; universal waste collection, removal and disposal; demolition; closure of landfill; continuation and closure of abandoned mine lands (AML) concurrent with SR-83 construction; expansion of AML program; closure of the holding pond and coal yard and post closure care. Frontier will monitor the area for 30 years for environmental issues.

A solar power grid will also be installed because having access to a renewable, or green, power source is something many businesses want when they are considering moving to a new area. Frontier also feels that the central location to Columbus, Pittsburgh, and Cleveland, will be a benefit to new businesses. There is also a railroad spur on site and access to interstate highways.

David Franjoine, CEO of Frontier, said that they would be working with all local, state and federal agencies to bring new businesses to the site. “It will be a long process to bring in new tenants. We are going to have to work hard and work with the community.” Rob Zuchlewski, CEO of Frontier, said that one thing the park has going for it is being in Ohio. “Ohio has a very pro-business government and Jobs Ohio works hard for businesses.”

Frontier plans to recycle as much as possible from the dismantling of the power plant. Pete Hartung, senior project manager, said the stacks will be demolished. When the time comes for the stacks to come down, he said a detailed plan will be worked out with local emergency services, along with state and federal agencies. “It will take a lot of detailed planning to demolish them safely.”

Frontier expects the demolition of the power plant to take three and a half to four years and the CCR clean-up to take five to six years. They are hoping to have most of the field work finished within seven years. Some of the high walls on the property (from abandoned mine lands) will be filled in and the land will be flat and clean for new businesses to develop. AEP Ohio will still own and maintain a substation that is in the middle of the land that was sold to Frontier.

Franjoine said the company is always looking to hire local employees to help with their projects and expects 80 – 90 will be needed at the Conesville Industrial Park. Anyone who is interested can check their website at frontier-companies.com. Erich Skelley, site consultant, said they will be working hard to make sure there are no trucks traveling through the village of Conesville. “If you see something we need to address, please contact me.”

From the Coshocton Beacon